Around 2 months ago I was having a mundanely average morning at work when a message came through that nearly made me spit tea across the whole desk. The lovely team from Ocean Florida invited me to watch Disney on Ice at the O2 with a bunch of other Disney loving influencers and from that point on my day went from zero to hero (I will try and keep the Disney quotes to a minimum promise!)

Christmas came and went, New Years flew by and before long I was on the jubilee line with my invitation in hand and ready to watch my favourite films be bought to life on the ice. We gathered at All Bar One and I would be lying if I said I wasn’t starstruck by the other Disney influencers I was able to spend the night with (All of whom are as genuinely lovely in real life as they are in their videos!) I had such a pinch me moment as I didn’t feel big enough or important enough in the Disney community to deserve to be there but everyone was so welcoming and it made me proud of my little blog and the opportunities it has bought me! Enough of the self love speech though, let’s get back into the actual show. 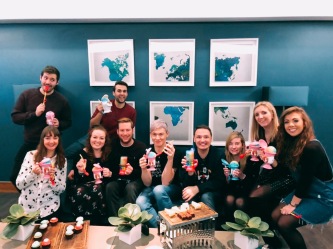 Each more excited than the other, we followed the Ocean Florida team to their box in the stadium, which was decked out with the most amazing looking cakes, and after a bit of mingling took our seats for the show. As someone who has as much skill and grace on the ice as Bambi I was blown away by how effortless and talented the skaters were. The show opened with Minnie and Mickey and then progressed to tell the key parts of a range of classic Disney stories like Moana, Tangled, Cinderella and Beauty and the Beast. If the skating and stunning costumes weren’t enough they also had some amazing sets and visual effects like snow and fire (which still puzzles me to this day in all honesty). Instead of singing they just danced to the soundtrack of the most beloved Disney songs, which in my opinion was probably for the best as I can’t imagine it is easy to stay in tune when you’re being spun above the head of a man who is simultaneously spinning on ice. 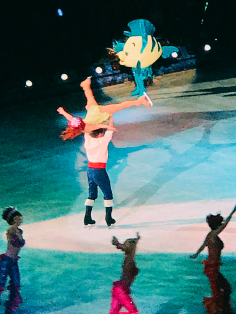 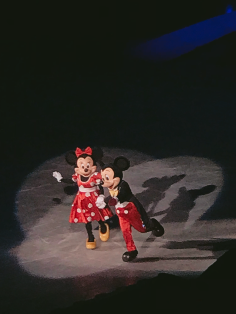 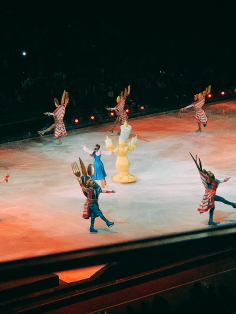 During half time, as if the team at Ocean Florida hadn’t already been generous enough, we were presented with an array of food and snow cones in novelty Disney goblets, (why does everything always taste better when it comes in a fancy cup?!) and dreamed about how much we would each love to be able to skate. The second half seemed to be over in the blink of an eye! It focused mostly on the story of Frozen, which makes sense given the whole context of the show, but I must admit it wasn’t my favourite as it included the most terrifying looking Olaf anyone could possibly imagine! The show concluded with all the characters on the stage dancing around Cinderella’s beautiful carriage and it really managed to capture the magic of Disney that could make any grumpy Grandad feel like a child again.

Overall I thought the whole show was amazing and even though to me it felt a bit short, I imagine it would be the perfect length for any young child and their family to enjoy. If you’re looking for a magical experience that will have you singing along to your favourite Disney moments whilst also leaving you in awe of the skaters incredible talent then I couldn’t recommend the show more.

I would also like to say a massive thank you to the team at Ocean Florida for giving me the opportunity to see Disney on Ice! They were incredibly accommodating and if they can make one show in London feel so magical then I can’t imagine how amazing they would make a whole holiday to Disney World in Florida be! 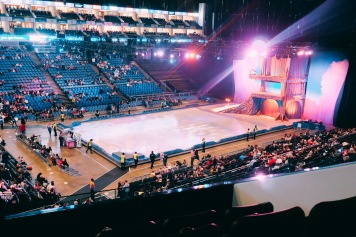 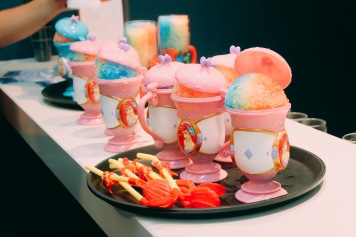 Have you ever been to Disney on Ice? I would love to hear your thoughts on it.

Go and grab another cuppa on me, Princess Em x

One thought on “Disney on Ice with Ocean Florida”