In December of 2017 I was lucky enough to visit Lapland, Sweden, for my 21st birthday. It was the most amazing holiday of my life and I made sure to vlog it, which you can watch here, but I figured it also deserved a written account on my blog. Here is my travel diary of what I got up to and the things I would highly recommend to anyone looking for a magical winter break next year.

Today was solely a travel day. We got a flight from Gatwick to Stockholm and then changed to a domestic flight to Kiruna which overall took around 4 hours. When we landed at Kiruna, at about 4pm, it was pitch black and -20 degrees which I must admit was a bit of a shock. We were picked up by a representative from Nordic Visitor, who were our travel company for the trip, and taken to their base to pick up some warm overalls, snow boots and grabbed a slice of pizza for dinner. From there we were dropped at our accommodation, we stayed in cabins at Camp Ripan. Each cabin was big enough for a family of 4 and there was also a main reception with a bar, viewing platform and restaurant. After unpacking we headed into the bar for some Glogg, a traditional mulled wine made with cloves and cinnamon, and some gingerbread cookies – absolute heaven! 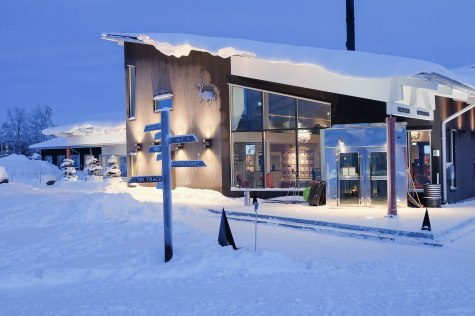 Kicking the holiday off with a bit of exploring, we layered up and headed out into the town of Kiruna. It was like something taken out of a fairytale with pastel coloured houses buried under mountains of snow. We looked around the traditional church and even sat in to listen to some beautiful carols being sung. The whole town is built next to a iron mine and as a result it is slowly sinking. They plan on up and moving the whole town and its residence 3km away from its current location, including taking apart and reassembling the church, which was really interesting to read about in the town hall. Lunch was a very surreal experience. We found a burger van parked in a petrol garage that was selling reindeer sandwiches and chips but it also had the most beautiful teepee seating area filled with fairy lights and a roaring open fire. Very delicious but left you very delirious when you stepped out to see the locals filling their cars up with petrol. 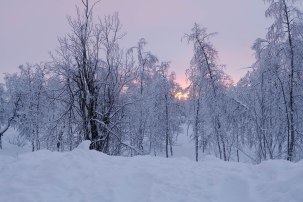 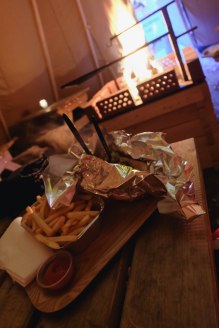 Once back at out hotel we got picked up by a guide and taken to the Icehotel. It is a stunning structure made entirely of ice and offering 65 individually designed rooms for guests to spend the night in. We spent a couple of hours exploring the different rooms, my favourite being the space themed room, before being shown to our own bedrooms for the night. We were lucky enough to stay in the deluxe rooms which meant they had a ‘hot room’ in the back with a bathroom and sauna in. The bedrooms themselves are kept at a constant temperature of -5 degrees (which was actually warmer than the -25 degree temperature outside) so you have to sleep in a thermal sleeping bag and wholly hat. My room was like a maze of giant walls of ice that created a pathway to the bed and it felt like something out of Game of Thrones.

In the evening we were taken out deep into the middle of nowhere for a snowmobiling trip. We followed the guide out along twisty paths through the snowy forest but the most amazing part of the night happened when we entered a massive clearing. For the next 20 minutes we sat and watched the most incredible display of northern lights in the sky. Our guide told us it was the best they had seen for 4 years and it was absolutely breath taking. Turns out it is also very difficult to photograph but I will never forget the bright colours dancing across the sky. We carried on snowmobiling and then stopped in a cabin for some dinner of lingonberry juice and reindeer stew (there is lots of reindeer on this trip)  before returning to the ice hotel for one of the most bizarre night sleeps of my life. 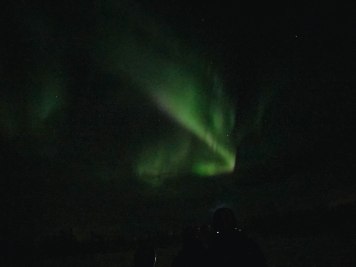 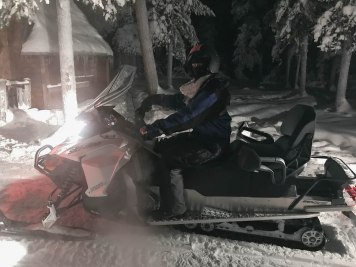 I was woken up by a lovely member of the Icehotel staff who gave me a hot cup of lingonberry juice and essentially checked that I hadn’t frozen the death in the night. Given the circumstances I slept really well, the beds were comfy and the sleeping bags were incredibly warm, I just got a very chilly nose! We had one last look around the Icehotel and then headed back to Camp Ripan where we discovered the spa. Dipping in and out of the saunas and hot pools we had a very relaxing day and caught up on a bit of sleep that we missed out on the night before.

Of all the days this was our least busy and most relaxing. In the evening my dad, brother and I ventured back out into the forrest with some snow shoes. They were like big spades with grips on that you attached to the bottom of your shoes and they allowed you to trudge through the snow. Of all the activities this was my least favourite I have to admit, it was very cold, quite difficult and in a way rather pointless as we just walked around in a circle. We did start a fire and saw some amazing stars, as we weren’t allowed any lights, but other than that it would not be something that I would recommend. 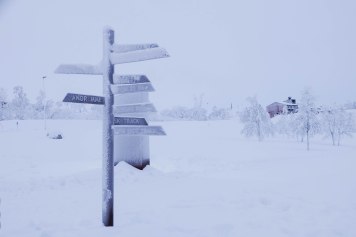 This day was without a doubt my favourite! We spent the day being Husky mushers (driving sleds pulled by huskies) and it was practically my dream came true. On arrival we were greeted by around 140 dogs and led to our sleds made up of 6 huskies. My brother and I took it in turns driving whilst the other sat on the sled being pulled along. We ran across fields of snow and through the woods, with the most beautiful views, but most importantly we got to stroke and cuddle around 30 husky dogs. The youngest on our sled was around one year old and each one loved being snuggled more than the last. I cannot recommend this experience enough! All the guides were so friendly and we stopped for lunch of hot mushroom soup and cheesy bread in a lovely teepee. Most importantly though it was a day with dogs, lots and lots of dogs! (Have I mentioned that dogs were involved enough?) 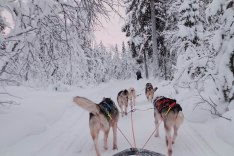 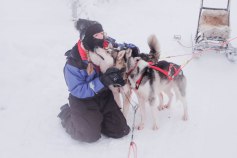 In the evening we drove for about an hour to the Abisko Sky Station. We were meant to go up a in a chairlift to the station but unfortunately the winds were too strong so it was cancelled. We still got an amazing 3 course meal and watched an interesting presentation all about the Aurora Borealis (northern lights). Following the meal we went on a walk down to a lake where there was a possibility to see the lights again but due to the wind it was incredibly cloudy so we weren’t able to. We were told that it is known to be a place with a high chance of seeing the lights though so if you want to see them you should check it out!

This was our final day in Kiruna. In the morning we checked out of the hotel and got a taxi to the local reindeer farm. The farm itself was really interesting as it had lots of information about the natives and how they used to live. We were then able to go into a cornered off area and hand feed some reindeers. It seemed a bit intimidating at first as they are rather large animals but turns out they are just like large friendly dogs! They took the food so gently and were happy for you to give them a stroke. It is important to say however that they are incredibly greedy animals so if you want their attention then you will definitely need some food!

We had a rather tense journey home as we were only allocated 50 minutes, once we landed in Stockholm, to get to our connecting flight back to London. Seeing as we were going from a domestic flight to a international flight we had to cut through the lines at security and passport control in order to make it. Ironically after sprinting for the flight our plane got held on the tarmac for an hour due to heavy traffic, at least it gave us time to catch our breath! Before long we were back home and the magic was over! I cannot express enough how much of a winter wonderland lapland is and could not recommend  it enough as a holiday if you want to get away in the colder months! Just remember to pack lots of layers and some reindeer food!

Once again I did vlog the whole holiday so if you want a more visual representation of what I got up to then you can watch it here!

Go and grab another cuppa (or a glass of Glogg) on me, Em x 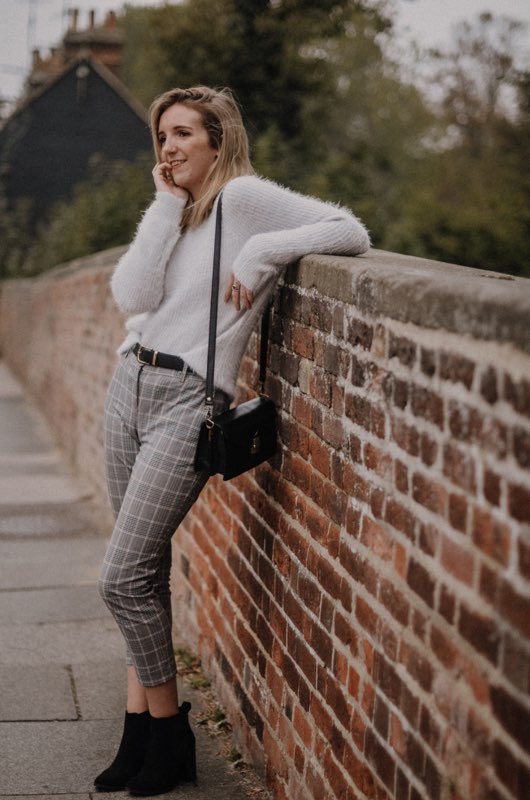